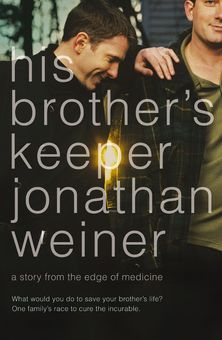 Biology used to be a science of the way things are. Now it is a science of the way things work, like physics or engineering. Biology’s progress fascinates and appals us because it has gone from learning the ways of nature to trying to turn her. In his extraordinary new book, Jonathan Weiner reveals the life-changing discoveries that have been converging over the past half a century to bring us to a moment when biology has the power to change life as we know it.

When Stephen Heywood, a carpenter, discovered he had A.L.S., a gradual, mysterious deterioration of the nervous system, Jamie Heywood, gave up his lucrative job to try and save his brother’s life. He worked with cutting-edge scientists in a race to find a cure. Through this remarkable journey with a family in crisis, we are given an overview of the various gene therapies that are still on the horizon, capable of potentially bringing back those suffering from neurological diseases such as ALS, Alzheimer’s, Parkinson’s, and other various disorders of the brain.

Through Jonathan Weiner’s translucent prose, we experience not only the passion and torment of the Heywoods, but the fascinating and bewildering frontiers of biology. We learn a vast amount about the groundbreaking technologies that may one day save our own lives and will almost certainly change the way we live them.

Reviews of His Brother’s Keeper