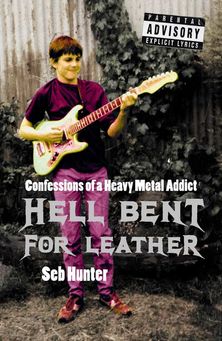 Hell Bent for Leather: Confessions of a Heavy Metal Addict

A HEARTBREAKING AND HILARIOUS CONFESSION OF A HEAVY METAL OBSESSION.

Seb Hunter was a Heavy Metal fan and he’s not proud.

HELL BENT FOR LEATHER is the story of Seb Hunter’s 15-year Heavy Metal journey: from his first guitar (his dad’s), to his first gig (Rag ‘n’ Bones play the John Stripe Theatre in Winchester) and on through groupies and girlfriends and too many drugs, to a faltering career in London where spiralling egos, musical differences and the arrival of Grunge (and a much needed haircut) kill the Heavy Metal dream.

Along the way you’ll learn to spot a Fender Telecaster from a Gibson Flying V, Thrash Metal from Glam, and ‘the Priest’ from ‘the Gunners’. It will tell you when to play a drum solo, how to wear Spandex and exactly what to do when you’re in the middle of a muddy field at the Donington Festival and you desperately need a piss.

Affectionate, irreverent, and very funny HELL BENT FOR LEATHER is a also moving story of adolescence, of playing air guitar in your bedroom, of living with parental disapproval and of struggling for acceptance amongst your friends when you carry a shameful secret obsession.

A must for anyone who has loved Heavy Metal, or laughed at Heavy Metal; for fans of SPINAL TAP, WAYNE’S WORLD, or the new superstars of British music THE DARKNESS.

Reviews of Hell Bent for Leather: Confessions of a Heavy Metal Addict