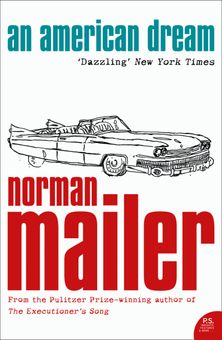 War hero, ex-Congressman, a professor of ‘popular but somewhat notorious reputation’, television personality and husband of the rich and beautiful Deborah (’a girl who would have been bored by a diamond as big as the Ritz’), Stephen Rojack lived the American Dream. But his enviable life concealed a strange tension, the constant ‘itch to jump’, and when one day he finally cracks and strangles his luscious wife, he unleashes a personality of undreamt-of ferocity. A wanted murderer, Rojack is suddenly catapulted into an alien world of gangsters, crumbling tenements and downtown bars. Here, he meets Cherry, a small-time singer who ekes out her living in sleazy nightclubs, waiting for a break. She’s the woman Rojack falls for, dangerously, desperately, tragically… A powerful exploration of one man’s quest for depravity, An American Dream shocked the USA on first publication in 1965 with its graphic depictions of sex and violence. One of the key works of twentieth-century American literature, the novel’s white-hot prose makes it, for many, Mailer’s finest achievement.

Reviews of An American Dream