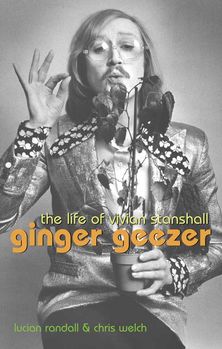 Biography of Vivian Stanshall, of whom John Peel said: ‘As lead singer of the Bonzo Dog Doo-Dah Band, Vivian Stanshall was the court jester of the underground rock scene of the Sixties… he brought an absurdist sense of humour to a scene that was already beginning to take itself too seriously.’

Vivian Stanshall started the Bonzo Dog Do-Dah Band in the early 60s while at art school in London. Rehearsials were in the canteen and gigs held in pubs. The anarchic shows, with comedy, singing and 1920s dress took off, and after leaving college albums were made: I’m the Urban Spaceman’ reached number 5 in 1968, and one track appeared in the Beatles’ film Magical Mystery Tour. The group – major players were Neil Innes, Vivian, Rodney Slater and Roger Ruskin-Speare – appeared often on TV’s Do Not Adjust Your Set, toured the US, and appeared at the Isle of Wight concert in 1969. But the following year the band broke up. What followed for Stanshall was not the successful solo career (that Neil Innes managed) but binges with Keith Moon and drinking and drug problems. Vivian continued to work: in film radio, in adverts and albums; but two marriages failed, a houseboat sank… and Vivian died in a house fire in north London in 1995.