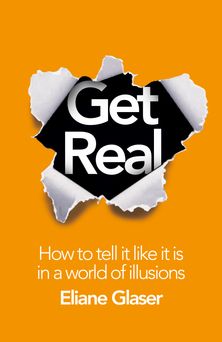 A passionate and entertaining guide to spotting and decoding the delusions we live under.

These are just a few examples of the growing gap between appearance and reality in modern life. With the melting away of the conflicts between East and West and Right and Left, the old ideologies were supposedly consigned to history. But Eliane Glaser argues that they never really went away – they just went undercover, creating a looking-glass world in which reality is spun and crude vested interests appear in seductive new disguises. A world of illusion, persuasion and coercion which aims to conceal the truth and beguile us all. It’s time to radically alter the way we perceive the world, to raise a sceptical yet optimistic eyebrow. Time to get real.

Get Real is a passionate and entertaining guide to spotting and decoding the delusions we live under – from ‘revolutionary’ plus-size models to ‘world-saving’ organic vegetables; from heavily scripted and edited ‘reality’ TV to ‘life-changing’ iPhone apps. Busting the jargon and unravelling the spin, Get Real reveals the secrets about modern life that we were never supposed to know. It’s an insider’s guide to understanding the present which puts the truth and the power to choose firmly in our hands. Only by telling it like it is can we improve – and maybe even save – our world for real.