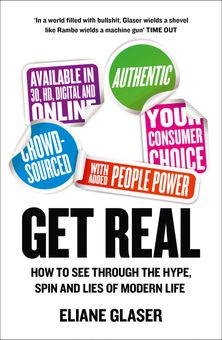 Get Real: How to See Through the Hype, Spin and Lies of Modern Life

To Eliane Glaser, these are all signs of the maddeningly surreal gap between appearance and reality in modern life. We are living in a looking-glass world in which reality is spun and crude vested interests are cloaked in seductive disguises. Get Real is a passionate and entertaining guide to decoding the delusions we live by. Busting the jargon and unravelling the spin, it reveals the secrets behind modern life that we were never supposed to know.

‘A quite brilliant reality check. Angry, erudite and accessible. I loved it’ Dame Jenni Murray

Reviews of Get Real: How to See Through the Hype, Spin and Lies of Modern Life