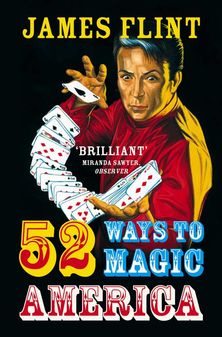 ‘A British take on ‘Carter Beats the Devil’ with acne and hangovers.’ Peter Preston, Guardian

Marty has been practising magic since he was nine. All his hard work and obsessiveness appear to have paid off when, ten years later, he wins both the title of Young Magician of the Year and the heart of Terri Liddell. A glittering professional future seems to beckon for them both, but Marty’s childhood dreams of following his heroes to Las Vegas soon begin to fade as the duo find themselves eking out a living on Britain’s decaying cabaret circuit. Still, it’s amazing what can happen when you’re down on your luck at the top of Blackpool Tower on a wet February afternoon…

‘52 Ways to Magic America’ is the second novel of James Flint, winner of the Amazon.co.uk Award 2000. An unsettling account of the collapse of childhood ideals and the confusion of love in an England dominated by dreams imported from the other side of the Atlantic, it fulfils the tremendous promise shown in his first novel, ‘Habitus’, and confirms Flint as one of the most original voices in British fiction.