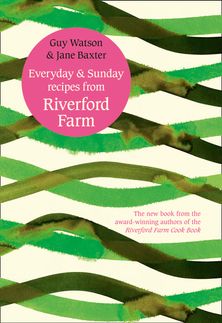 ‘What we like most is to produce foods ourselves from start to finish – from farm to table, the Riverford way. Food should tell a story and, because we know what it is, we can tell you.’

Riverford Farm was started by Guy Watson in 1985 with the three acres of land owned by his family in Staverton, South Devon. Within two years Guy had dedicated the entire area to organic farming and now Riverford is one of the country’s largest independent growers, as certified the Soil Association.

This leap came when Guy began to deliver his produce to local shops, including those owned by his brother. Eventually, word spread and an incredibly successful box scheme was set up, in which local distributors were incorporated to provide home delivery, with all the boxes packed at Riverford Farm.

Continuing on from the success of the first Riverford Farm Cook Book and the popularity of the Riverford Organic Vegetables website, this book will be an accessible guide to help readers get the most out of their box all year round.

Guy Watson and Jane Baxter, head chef of Riverford’s Field Kitchen, share useful advice on seasonal variations and simple, delicious recipes, with the must-have guide handily organised into months to allow the reader to enjoy it from January to December. Not only is this a brilliant guide for moving produce from the field to the kitchen, but it is also a celebration of healthy, local and organic food.