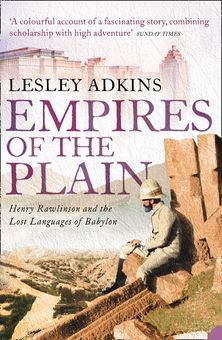 Empires of the Plain

This is the exciting, true adventure story of Henry Rawlinson, a fearless soldier, sportsman and explorer. From 1827 he spent twenty-five years in India, Iran, Iraq and Afghanistan. A brilliant linguist, fascinated by history, he became obsessed with cuneiform, the world’s earliest writing. An immense inscription on a sheer rock face at Bisitun in Iran was the key to understanding the many cuneiform scripts and languages, and only Rawlinson had the skills to achieve the perilous ascent and copy the monument.

In her gripping account, Lesley Adkins relates how Rawlinson triumphed in deciphering the lost languages of Persia and Babylonia, overcoming his bitter rival, Edward Hincks. While Rawlinson was based at Baghdad, incredible palaces with whole libraries of cuneiform clay tablets were unearthed in the ancient mounds of Mesopotamia, from Nineveh to Babylon – the great flood plain of the Tigris and the Euphrates rivers that had been fought over by so many powerful empires. His decipherment of the inscriptions resurrected these lost civilisations, revealing fascinating details of everyday life and forgotten historical events. By proving to the astonished Victorian public that people and places in the Old Testament really existed, Rawlinson assured his own place in history.

Reviews of Empires of the Plain