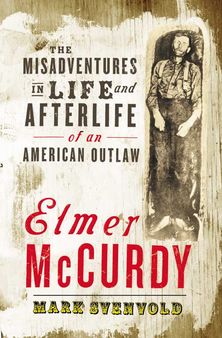 Elmer McCurdy: The Misadventures in Life and Afterlife of an American Outlaw

Born 1880. Shot dead 1911. Buried 1977. These are the critical dates in the extraordinary life and afterlife of Elmer McCurdy.

Elmer McCurdy’s first thirty-one years in this world didn’t add up to much. He was a hobo, a plumber-come-miner, who’d jumped a train and drifted west on the back of an infectious, turn-of-the-century optimism. He was a drunk too, and, soon enough, a failed train robber. In 1911, in an attempt to blow open the safe of a train, McCurdy fused $40,000 to the safe’s walls. Later that year he robbed the wrong train and rode away with a haul that was described by the papers as ‘one of the smallest in the history of train robbery.’ Within days he was dead – shot by a sheriff and his posse in a gun battle on a ranch.

At this point McCurdy, like millions of others, should have slipped quietly from memory. But, in death, he accidentally found fame. From the Joseph Johnson Funeral Home, where the owner propped McCurdy’s mummified cadaver up and charged a nickel-a-look, to the sideshows of the Great Patterson Carnival, McCurdy became big business. In 1928 he was the star attraction in a carnival that accompanied an extraordinary transcontinental running race from Los Angeles to New York. He was the ‘Oklahoma Outlaw’, admired as a hero in a criminal league to which he’d never truly belonged. And then, in the 1940s and 1950s, he was reinvented for a series of Hollywood exploitation films, before winding up painted day-glo orange and hanging by his neck in the Laff in the Dark ghost tunnel in Long Beach. He was found here in 1976 during the filming of an episode of ‘The Six Million Dollar Man’ and finally handed over to the authorities.

Mark Svenvold unravels this remarkable story – a dead body’s journey through the 20th-century – with the sensitivity the dead are due. Part travel book, part exposition of the bizarre and exotic corners of the American entertainment industry, part meditation on death and its meanings, ‘Elmer McCurdy’ is a unique and gripping biography.

Reviews of Elmer McCurdy: The Misadventures in Life and Afterlife of an American Outlaw