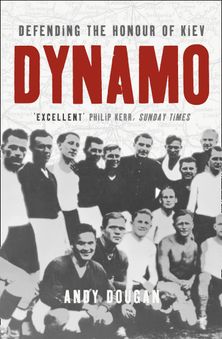 Dynamo: Defending the Honour of Kiev (Text Only)

When Hitler initiated Operation Barbarossa in June 1941, he caught the Soviet Union completely by surprise. At breathtaking speed his armies swept east, slaughtering the ill-prepared Soviet forces. His greatest military gains of the entire war were made in a few short months, and the largest single country that he conquered was the Ukraine, roughly the size of France. Ukraine’s capital, Kiev, was circled, assaulted and overrun, and among the city’s defenders who were captured and incarcerated were many of the members of the sparkling 1939 Dynamo Kiev football team, argaubly the best in Europe before the war. Captured Kiev was a starving city whose population were deported in vast numbers as slave labour.

Reviews of Dynamo: Defending the Honour of Kiev (Text Only)