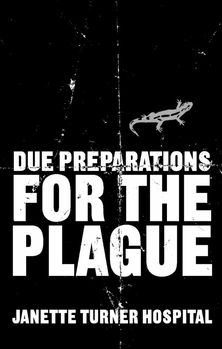 Lowell feels contagious with doom. A divorced father with young children, he dreads the anniversary of a hijacked Paris-New York flight on which his mother was killed when he was sixteen years old. Samantha, a survivor of the disaster is plaguing Lowell with phone calls. She says she has information from declassified documents and is obsessed with learning the whole truth about Air France 64. ‘What can be worse than not knowing?’ she asks. But Lowell only wants to forget.

When his father dies suddenly and mysteriously on the anniversary of the hijack, leaving Lowell the key to a locker in an airport terminal, a terrible story unfurls before him. Together, he and Samantha find the truth bearing down on them with the force of an aeroplane exploding. Janette Turner Hospital’s electrifying new novel probes with astonishing acuity the murky worlds of espionage and intelligence gathering, the experience of terror and the meaning of survival.