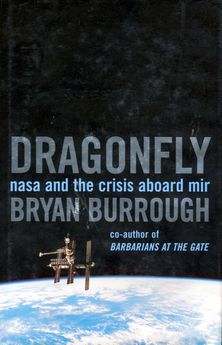 Dragonfly: NASA and the crisis aboard Mir

The inside story from the universe’s most outside habitation: the Mir Space Station, home since 1992 to astronauts and cosmonauts. In a white-knuckle narrative drama that is wholly space fact, not science fiction, sour Russians, intense Americans and one resourceful Briton battling to establish a pioneering homestead on the final frontier.

Space is dangerous. Life in space unbearably fragile. Blasting across it in a rocket is daring enough, but to really claim it, to tame it, you have to stay there, to live in it. Only a very few have tried, in every case their courage beyond question. Because in space even a fleck of paint can be deadly. Spacewalking outside the Mir station – though seemingly tranquil – is in effect walking at 18,000 miles per hour. That one fleck of paint has the destructive capacity of a dum-dum bullet. It would rip through a space suit and an astronaut with instant catastrophic effect. Since 1992 astronauts and cosmonauts have been conducting an extraordinary living experiment as Russian and American character and method clatter headlong into one another. Mir is a 25-year-old space station coming to the end of its life in terrifying style. It has been the site of the worst ever fire in space – and in zero gravity fire is truly terrifying – and of the only occasion to date when every astronaut’s nightmare has actually come true: a near fatal collision when a supply ship pierced the station’s hull. Mir was within minutes of disaster, the occupants moments from an airless tomb.

Bryan Burrough depicts with thrilling intensity the intrepid struggle to survive on the edge of infinity.

Reviews of Dragonfly: NASA and the crisis aboard Mir