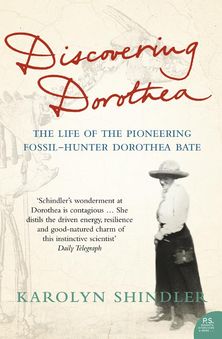 Dorothea Bate, paleontologist, geologist, archaeologist and ornithologist, established archeo-zoology as a serious scientific subject. She lacked any real formal education bar a childhood love of natural history acquired from the Carmarthenshire countryside in which she grew up. In 1898, at the age of 19, she talked her way into a job sorting bird-skins in the Bird Room at the Natural History Museum, London, becoming the first woman to be employed there.

Dorothea possessed immense charm and energy, and over the next fifty years she was known as one of the outstanding personalities and scientists at the Museum. But she was to make her greatest impact outside the Museum – travelling and exploring (alone), discovering fossil remains and previously unheard of species (such as pygmy hippos and dwarf elephants), and thereafter her travels and explorations ranged throughout the Pleistocene and throughout the Mediterranean.

Karolyn Shindler beautifully recreates Dorothea’s life and reveals an ebullience and vivacity of character that shines from every line. On the unwanted attentions of the Vice-Consul in Majorca (where she had discovered a unique species of fossil antelope) Dorothea remarked: ‘I do hate old men who try to make love to one and ought not to in their official positions.’

This book is a splendid example of untold women’s history. Like the story of Mary Kingsley, and all those who feature in ‘The Blessings of a Good Thick Skirt’, it is the tale of a woman who sets out courageously to discover more about the world and in doing so have left an inspirational legacy for others.