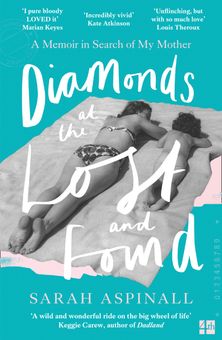 Sarah Aspinall grew up in the glittering wake of her irrepressible mother Audrey. Born into poverty in 1930s Liverpool, Audrey had always known that she was destined for better things and was determined to shape that destiny for herself. From the fading seaside glamour of Southport, to New York and Hollywood, to post-war London and the stately homes of the English aristocracy, Audrey stylishly kicked down every door she encountered, on a ceaseless quest for excitement – and for love.

Diamonds at the Lost and Found tells the story of how Sarah eventually pulled free of her mother’s gravitational pull to carve out a destiny of her own. It is a beguiling testament to dreams, defying convention and exasperated love.