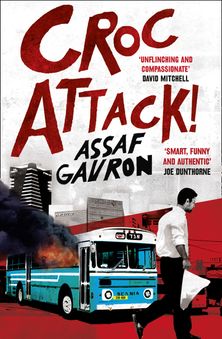 ‘Why is everyone so paranoid in this country? Can’t dark guys get on buses with suit bags any more?’

Eitan Enoch – ‘Croc’ to his friends – is taking his usual bus to work in Tel Aviv one morning when a fellow passenger starts to worry about the dark-skinned man with the suit-bag sitting up at the front.Thus begins a week of bloody bombings and bloodier reprisals, at the end of which Croc is transformed into an inadvertent national celebrity: ‘CrocAttack – the man the terrorists couldn’t kill!’ Naturally, the Palestinian cell behind the attacks are less than happy about this reluctant symbol of Israeli defiance. They may not have been after him before, but they are now.

Fast as a thriller, blackly funny and very contemporary, ‘CrocAttack!’ is the story of the lethal convergence of two very different lives, and a tragicomic portrait of the country exploding around them.