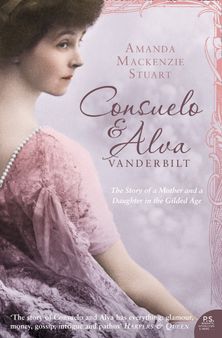 Consuelo Vanderbilt was one of the greatest heiresses of the late 19th-century, a glittering prize for suitors on both sides of the Atlantic. When she married, a crowd of over 2,000 onlookers gathered, and newspapers frenziedly reported every detail of the event, right down to the bridal underwear. Even by the standards of the day the glamorous, eighteen-year-old had made an outstanding match: she had ensnared the twenty-four-year-old Duke of Marlborough, the most eligible peer in Great Britain. Yet the bride’s swollen face, barely hidden under the veil, presaged the unhappiness that lay in the couple’s painful twelve-year future. It was not Consuelo, but her domineering mother who had forced the marriage through. This captivating biography tells of the lives of mother and daughter: the story of the fairytale wedding and its nightmarish aftermath, and an account of how both women went on to dedicate their lives to the dramatic fight for women’s rights, in the light of their own suffering.

Reviews of Consuelo and Alva Vanderbilt