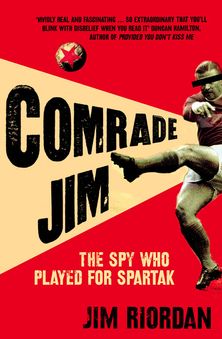 Like many working class children growing up in the war, the young Jim Riordan would fantasise his way out of his devastated surroundings with dreams of Wembley and FA Cup glory for his local team, Portsmouth FC. Spartak Moscow, the team he would end up playing for, wasn’t even on his radar. Taught Russian and trained as a spy in the same institution that nurtured the likes of Alan Bennett and Michael Frayn, he was posted to Berlin as part of his National Service to listen in on Soviet military communiqués. But, unbeknownst to his seniors, he began mixing with Russian servicemen, mostly through informal kick-abouts, and the passion of these idealistic young men would cultivate his interest in Russian culture, and especially communism, until it blossomed into a full-grown love affair. From the shambolic outfit that was the British Communist Party in the 1950s, to Cold War Moscow at its coldest, to his friendship with the Cambridge Five and meetings with Brezhnev and Gregarin, and his eventual debut in front of 50,000 Spartak fans at the Lenin Stadium, ‘Comrade Jim’ is the remarkable true story of the only Englishman to have played – and survived – Russian league football, told with grace, humour and lashings of vodka. An incredible journey of an ordinary man living through extraordinary times.