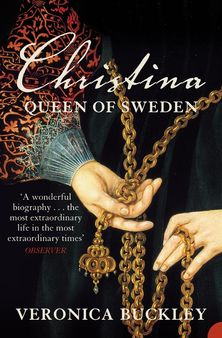 In 1654, to the astonishment and dismay of her court, Christina Alexandra announced her abdication in favour of her cousin, Charles. Instrumental in bringing the Thirty Years War to a close at the age of 22, Christina had become one of the most powerful monarchs in Europe. She had also become notorious for her extravagant lifestyle. Leaving the narrow confines of her homeland behind her, Christina cut a remarkable path across Europe. She acted as mediator in the Franco-Spanish War and, in return for financial support, was received into the Roman Catholic Church despite the fierce condemnation of her protestant countrymen. Christina settled in Rome at the luxurious Palazzo Farnese where she established a lavish salon for Rome’s artists and intellectuals. More than once she was forced to leave Rome while one scandal or another died down; she was painted a lesbian, a prostitute and even a hermaphrodite. Her most impassioned affair was with a well-connected Cardinal. Later, when financial support from the Pope and the Spanish crown dried up, Christina began to court French favour, eventually even plotting with them to overthrow the Spanish at Naples, where she hoped to be installed as queen. Despite her political vacillations and a lifelong refusal to restrain her appetites, Christina ended her days in Rome relatively free from disfavour and financial strife. At the express order of the Pope, she was buried, with full ceremony, in the walls of St Peter’s Basilica, one of only two women to be so honoured. Reminiscent of Amanda Foreman’s Georgiana, Duchess of Devonshire and Claire Tomalin’s Jane Austen: A Life, Buckley combines a personal approach with a lively interest in the social and historical world of seventeenth-century Europe to bring this remarkable personality to life. Note that it has not been possible to include the same picture content that appeared in the original print version.