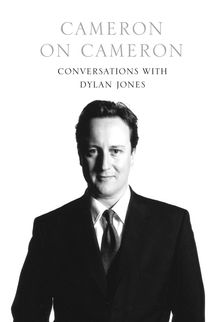 Just who does David Cameron think he is? In an engaging series of landmark interviews – that will define the would-be prime minister ahead of the next election – Dylan Jones finds out.

David Cameron is asking you for the keys to Number Ten – but is he a smartly-dressed smoothie with all the right lines, or a gifted politician who instinctively understands the country’s priorities? A throwback to the age when privilege brought power, or a dynamic alternative to a Labour party that has run out of ideas?
Award-winning journalist Dylan Jones set out to answer these questions in a series of wide-ranging and candid interviews that will define David Cameron ahead of the next election – and for years to come. A book about a politician for people who don’t buy books about politicians, Cameron on Cameron will for many settle the question of whether David Cameron has got what it takes to lead the country.
What Cameron thinks may soon become what Britain does – and Jones teases out the details of Cameron’s positions on the big issues. From the Iraq war to our friendship with America, from education to immigration, Cameron on Cameron will make for an unprecendented view into a politician’s world and a document of practical use in our democracy.
From the Conservative party’s bouts of vicious internal backstabbing to Cameron’s marriage to Samantha – and their struggles to cope with the disabilities of their son Ivan – Cameron on Cameron lays bare the forces which shape the man who may succeed Gordon Brown before the decade is out.