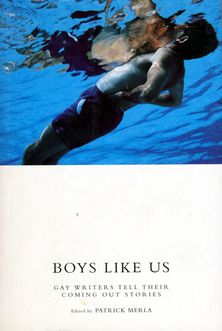 Boys Like Us: Gay Writers tell their Coming-Out stories

A collection of true ‘coming out’ stories, written by the leading gay voices of the US. This is a literary, biographical, sociological and historical tour de force.

“Every new friendship in gay life entails an explanation of How I Got Here”. ‘Coming out’ is the central event of a gay man’s life. This collection recounts individual entries into the gay community. They are intense, sometimes unexpectedly funny tales of romance and heartache, while also being histories of repression, liberation, rape and first love. Arranged chronologically from Manhattan in the late 1940s to San Francisco in the early 1990s, the pieces ultimately form a documentary of changing social and sexual mores during the last half-century. Written specifically for this collection, these twenty-eight personal essays present powerful, often stunning evocations of ‘coming out’ including works by award-winning and best-selling gay writers such as Edmund White, Samuel Delany, Alan Gurganus and Andrew Holleran.

Reviews of Boys Like Us: Gay Writers tell their Coming-Out stories