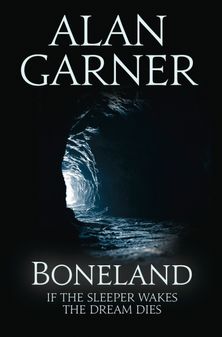 A major novel from one of the country’s greatest writers, and the crowning achievement of an astonishing career, ‘Boneland’ is also the long-awaited conclusion to the story of Colin and Susan – a story that began over fifty years ago in ‘The Weirdstone of Brisingamen’…

‘A woman was reading a book to a child on her knee.

‘“So the little boy went into the wood, and he met a witch. And the witch said, ‘You come home with me and I’ll give you a good dinner.’ Now you wouldn’t go home with a witch, would you?”

Professor Colin Whisterfield spends his days at Jodrell Bank, using the radio telescope to look for his lost sister in the Pleiades. At night, he is on Alderley Edge, watching.

At the same time, and in another time, the Watcher cuts the rock and blows bulls on the stone with his blood, and dances, to keep the sky above the earth and the stars flying.

Colin can’t remember; and he remembers too much. Before the age of thirteen is a blank. After that he recalls everything: where he was, what he was doing, in every minute of every hour of every day. Everything he has read and seen.

But Colin will have to remember quickly, to find his sister. And the Watcher will have to find the Woman. Otherwise the skies will fall, and there will be only winter, wanderers and moon…