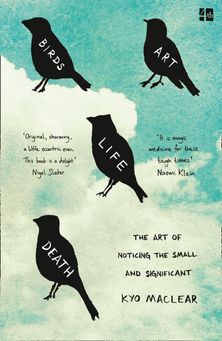 Birds Art Life Death: The Art of Noticing the Small and Significant

We live in a world that prizes the fast over the slow, the new over the familiar and work over rest. Birds Art Life Death is Kyo Maclear’s beautiful journey to stake out a sense of meaning amid the crushing rush.

One winter Kyo Maclear felt unmoored. Her father had recently fallen ill and she suddenly found herself a little lost. In the midst of this crisis, she met a musician who loved birds. When he watched birds and began to photograph them, his worries dissipated. Curious, she began to accompany him on his urban birdwatching expeditions and witnessed the magic of a transient city. Birds Art Life Death asks how we might gain perspective and overcome our anxieties by learning to cherish the urban wild spaces in which we live. Kyo urges us to find a subtle but restorative meaning in the everyday.

Reviews of Birds Art Life Death: The Art of Noticing the Small and Significant