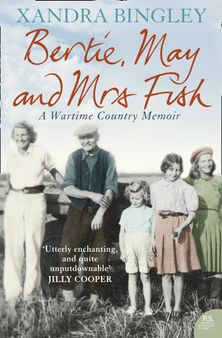 Bertie, May and Mrs Fish

‘Bertie, May and Mrs Fish’ is Xandra Bingley’s account of her childhood on a Cotswold farm, set against the backdrop of World War II and its aftermath. Bingley’s mother is left to farm the land, isolated in the landscape, whilst her husband is away at war. With its eccentric cast of characters, this book captures both the essence of a country childhood and the remarkable courage and resilience displayed by ordinary people during the war. The beauty and sensitivity of Bingley’s observation is artfully balanced by the harshness and grit of her reality. ‘In the cowshed my mother ties her hair in a topknot scarf that lies on the feedbin lid. At five-thirty each morning and four o’clock in the afternoons she chases rats off the mangers. She measures cowcake and rolled oats and opens the bottom cowshed door. Thirty-one brown and white Ayrshires and one brindle Jersey tramp into their stalls…’ ‘Two thousand acres. A mile of valley. Horses cattle sheep pigs poultry. Snow above the lintels of the downstairs windows. Her fingers swelling. Chilblains. Her long white kid gloves wrapped around a leaky pipe in her bedroom. Knotted at the fingers. She has a lot to learn and no one to teach her. Accidents happen.’ Bingley tells her tale in a startling voice which captures the universe of a child, the unforgiving landscape and the complicated adult world surrounding her. Her acute observation, and her gift for place, people, sound and touch make this a brilliantly authentic and evocative portrait.

Reviews of Bertie, May and Mrs Fish