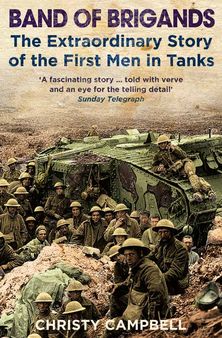 Inspired by a visit to northeast France to witness the excavation of a remarkably intact First World War tank from beneath a suburban vegetable plot near the town of Cambrai, Christy Campbell – then defence correspondent of the Sunday Telegraph – began to piece together the little-known story of the young men who formed the British Tank Corps. Very few of them had been professional soldiers; they were motoring enthusiasts and mechanics, plumbers, motorcyclists, circus performers and polar explorers. One officer declared: ‘I have never seen such a band of brigands in my life.’ They had trained in conditions of great secrecy in the grounds of a mock-oriental stately home in East Anglia and were originally known as the ‘Heavy Branch, Machine Gun Corps’. The word ‘tank’ itself was deliberately chosen to mislead. Men in tanks saw the face of battle at its most brutal. Their task was to crush and burn the enemy out of his fortifications, and to carve a path for the infantry so they could finish the job with bayonet and grenade. Captured tank crews were beaten up or sometimes shot out of hand by the Germans. They fought in their stifling armoured boxes packed with petrol and explosives, aware that at any moment a shell-hit might incinerate them all. Christy Campbell has combed contemporary diaries and letters and later recollections to tell properly for the first time the robust yet harrowing story of how the first men in tanks went to war. The time frame is 1916-18, with a coda on how German blitzkrieg ideas developed from an English root.

Reviews of Band of Brigands