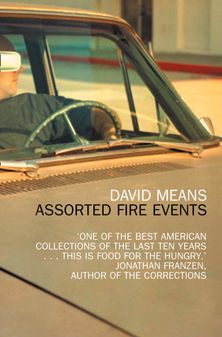 The paperback of the critically acclaimed story collection from David Means.

‘One of the best American collections of the last ten years…This is food for the hungry.’ Jonathan Franzen

‘Worlds collide and spring apart…this sort of thing happens all the time in life, yet I don’t think I’ve ever seen anyone bother to express it so devastatingly in literature.’ Julie Myerson, Guardian

‘There are stories in this collection that expose the pain of growing up, or the lies within marriage, as well as anything written by anyone, anywhere…The finest collection of stories to appear in years.’ John Burnside, Scotsman

‘Means presents the perfect detail at the perfect time. He has a tender, but revealing grasp of human frailty and – that rare thing – a gift for finding and conveying dignity to his characters.’ A.L. Kennedy

‘An unsettling, fiercly felt debut collection. His prose can sometimes give you lives in single sentences. In its rigour and controlled sense of experiment, it is reminiscent of some of the best of the more singular American short story writers of the last few decades.’ Tim Adams, Observer

‘We care for the characters as if we have known and loved and detested them forever…An exceptional book.’ Michel Faber, Scotland on Sunday