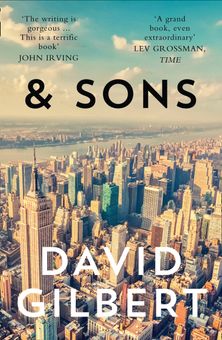 The Manhattan funeral of Charles Henry Topping would have been a minor affair but for the identity of the eulogist: reclusive author A. N. Dyer, whose novel ‘Ampersand’ stands as a classic of teenage angst. Now Andrew Newbold Dyer takes stock of his own life, the people he’s hurt and the novel that will endure as his legacy. He realises he must reunite with his three sons before it’s too late.

Eldest son Richard is a screenwriter in Californian exile. In the middle is Jamie, who has spent his life capturing the sorrow that surrounds him. And last is Andy, now a pupil at the boarding school that inspired ‘Ampersand’. It is only when the hidden purpose of the reunion comes to light do the sons realise what’s at stake – for their father, themselves and three generations of Dyers.

Daring, entertaining and insightful, ‘& Sons’ establishes David Gilbert as a writer to be treasured.