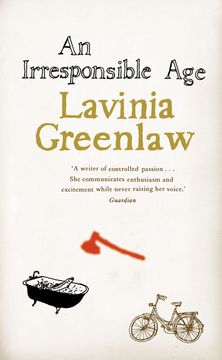 An Irresponsible Age, Lavinia Greenlaw’s new novel, is an intimate portrait of a family compelled by ways of living they should have outgrown and unable to face up to what really matters. Set in London in 1990, hesitant times with Thatcher still in power and the country stubbornly refusing to ‘abandon an idea just because it proved to be a bad one’, the book follows the life of Juliet Clough and her three siblings, all used to being held in place by each other but now rebounding off one another after the death of a brother and the retreat of their grieving parents. When Juliet, the focus of them all, is drawn into a complex love affair with the enigmatic Jacob, the others, too, find themselves falling in love and then, like her, evading the consequences. None will admit what they are doing, or why.

‘A terrific book, a meteorological force in its own right,’ said the Evening Standard of Lavinia Greenlaw’s first novel. An Irresponsible Age is every bit as absorbing and beautifully observed.

Reviews of An Irresponsible Age