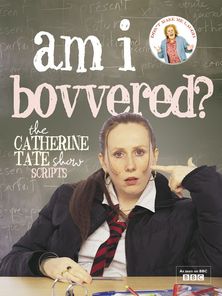 Am I Bovvered?: The Catherine Tate Show Scripts

The complete scripts of series one and two of ‘The Catherine Tate Show’, the most exciting new comedy programme on British TV.

In the space of two series, ‘The Catherine Tate Show’ – the latest to join the ranks of great British sketch shows – has made its creator a household name and, like ‘Ali G’ and ‘Little Britain’ before it, spawned a new national catchphrase – ‘Am I bovvered?’. Scathingly funny and brilliantly observed, characters like Nan Taylor and Lauren the schoolgirl have become instant classics and whetted the nation’s appetite for foul-mouthed pensioners and sulky teenagers.

Here, in the scripts of the first and second series, meet the motley crew of characters who Tate uncannily morphs into: there’s Aga Saga Woman, who has to deal with daily traumas such as telling her children that ‘Daddy hasn’t been able to find any good brie’ on his business trip to France; Paul and Sam, the Essex couple who get REALLY, REALLY overexcited about EVERYTHING; Bernie the Irish nurse who, when she’s not taking critically ill patients on wild nights out, is mixing up the medical records of the living and the dead; Derek, the camp elderly gentleman who is outraged at any suggestion that he is gay (‘How very dare you’); Moo Shepherd, the pathologically competitive Brummie dog trainer; Elaine Figgis the eternal romantic engaged to a man on Death Row; and many more.

Illustrated throughout with photographs of this one-woman comedy powerhouse in her various guises, ‘The Catherine Tate Show Scripts’ also includes additional original material and is the perfect companion to the show – for anyone who’s bothered…

Reviews of Am I Bovvered?: The Catherine Tate Show Scripts