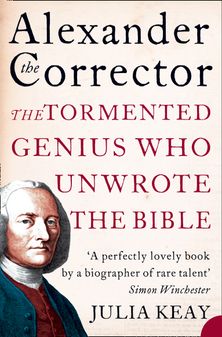 Cruden’s Concordance to the Bible was a monumental achievement; at 2.5 million words, it is four times the length of the Bible itself and in nearly three hundred years it has never been superseded. Yet Alexander Cruden is remembered today not so much for his mighty work as for the widespread belief that he was mad. Born in Aberdeen in 1699, as a young man he was cast into an asylum for reasons that at the time were considered too shocking to reveal. The scandal ruined his plans to enter the Church, and he fled to London, where he worked as a private tutor and then as a proof-corrector before becoming Bookseller by Royal Warrant to Queen Caroline (wife of George II). In 1737, weeks after completing his Concordance, he was back in the madhouse, abducted by a jealous rival for the affections of a rich widow and committed to a private asylum. After three months he managed to escape through a window. Some years later he was again incarcerated, this time after a dispute with his landlady. Each time he took his persecutors to court; each time his case failed because for different reasons he refused to explain the circumstances of his original incarceration. He unsuccessfully petitioned the King to be appointed ‘Corrector’ of the nation’s morals, thereafter styling himself ‘Alexander the Corrector’, promoting the 4th Commandment and performing ‘acts of benevolence to his fellow creatures’. Subsequent generations accepted the diagnosis of Cruden as mad, but Julia Keay has at last uncovered the scandal and reveals the true, but no less tragic, story of his ‘madness’. At times harrowing, at times richly comic, Alexander the Corrector restores the reputation of a lonely and misunderstood genius.

Reviews of Alexander the Corrector