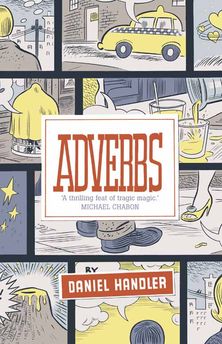 A dramatic meditation on love both fleeting and everlasting, ‘Adverbs’ is a serious work of fiction by one of today’s most innovative voices.

‘Adverbs’ marks the return of Daniel Handler to adult fiction as he tackles life’s most complicated and compelling noun: love. In a series of intersecting narratives that explore variations of that ineffable feeling, Handler crafts a moving and shifting story exploring the frustrating glory of this most troublesome of emotions.

Two friends, one dying and one lonely; an adolescent’s first homosexual stirrings for his sister’s boyfriend; a doomed, enormously inappropriate tryst between a taxi driver and his passenger; a high-school crush that falls painfully short of a movie projected on a grungy screen. Handler’s characters experience love in all of its dark, triumphant, devastating and sneaky forms. In ‘Adverbs’, Daniel Handler reveals to us how the most universal of themes is also the most unknown.

‘Love was in the air, so both of us walked through love on our way to the corner. We breathed it in, particularly me.’