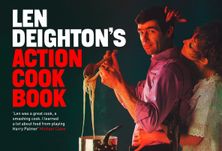 If you look carefully at Harry Palmer’s kitchen in the classic film ‘The Ipcress Files’ you will notice a newspaper pinned on the wall. This is one of Len Deighton’s classic cookstrips, the series that ran for two years when he was the Observer food writer. Because before he became famous as the thriller writer of his generation, Len Deighton had trained as a pastry chef. He was also a brilliant graphic artist (his credits include the first ever UK cover for Kerouac’s ‘On The Road’). ‘The Action Cookbook’ is the perfect mix of these two passions, created for the hero of his third passion. ‘The Action Cook Book’ was once an instructional book for the bachelor male – a guide to sophisticated cooking for the would-be Harry Palmer. It now has a great following as a fabulous piece of nostalgia as well as retaining real credibility as a genuinely useful cook book. If you need to create the basic wine cellar (basic to Len Deighton – decidedly aspirational to the rest of us), or to learn how to cook full-bodied meals with a seductive touch (how could you resist brain soufflé? – ‘brains are a very good constituent for a souffle. They are delicious fried, or in any of the piquant wine sauces’), then this is the book for you.