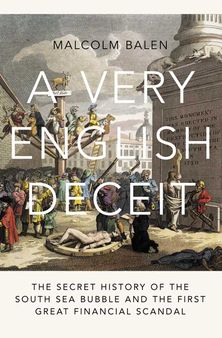 A morality tale for our times: the South Sea Bubble was a scandal of immense proportions. A classic collision of political ambition, mercenary greed and financial revolution that ensnared the Crown, Parliament and Bank of England in an C18th plot of sheer devilry.

The early years of the eighteenth-century produced two great monuments: one, Christopher Wren’s new cathedral of St Paul’s, an enduring testament to principled craft and masterful construction. the other an empty fraud of such magnitude that its collapse threatened to overturn monarchies and governments. Its failure delayed the introduction of modern market economies by two generations. Yet the full scale of this monumental deceit was quietly covered up and hidden, its enduring legacy a poorly understood colloquialism: the South Sea Bubble. The Bubble was a share scam that had its origins in the designs of a brilliant Scots economist, John Law, who, while exiled in France, persuaded people of all classes to exchange their gold and silver first for paper money and then for share certificates in a company whose fortunes seemed guaranteed. The shares soared in value almost overnight and the country’s first millionaires were created. It seemed a model no rival power could afford to ignore.

The English version was run by a reckless, ruthless and venal coterie. The sold similar paper shares, but in a company that had no assets, no business and no point. The deception drew in every level of the establishment from the King to the Commons, the professions to the Church. It deserved to bring down the whole rotten edifice that had supported it, but, in a very English manner, the guilty parties were protected from the full force of justice. Malcolm Balen reveals the full story of corruption and scandal that attended the birth of the first shareholder economy, and with it uncovers a parable for our times.