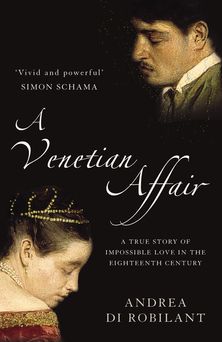 A Venetian Affair: A true story of impossible love in the eighteenth century

A true story of impossible love in eighteenth-century Venice between an Italian noble and the brilliant, illegitimate daughter of an English baronet.

In 1754 Andrea Memmo, the dashing and gifted scion of a distinguished Venetian family, fell in love with a captivating – and illegitimate – English beauty, Giustiniana Wynne. This match went against every convention of their day; it was an ‘impossible love’.

The lovers chased each other through peeling palazzos, ballrooms, salons, theatres and gambling dens, rubbing shoulders with legendary figures such as Canaletto, Goldoni and their friend, Casanova. They wrote passionate letters, developing a cipher to shield their intrigues from the prying eyes of family and spies. When the affair became public, the consequences were disastrous. Disgraced, Giustiniana left for Paris with her ambitious mother. She was launched into the glittering pre-revolutionary society in her hunt for a convenient husband. But her love for Memmo had lingering consequences that destroyed any chance of making a marriage. With Casanova sharing her exile from Venice, scandal was never far away. She travelled to London, hoping to build a new life, and there a very different fate lay in store…

A direct descendent of Memmo, Andrea di Robilant has used Andrea and Giustiniana’s remarkable letters to write this sparkling and evocative history of forbidden love in the world’s most romantic city.

Reviews of A Venetian Affair: A true story of impossible love in the eighteenth century