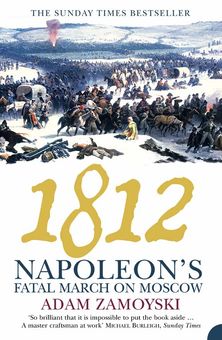 In 1812 the most powerful man in the world assembled the largest army in history and marched on Moscow with the intention of consolidating his dominion. But within months, Napoleon’s invasion of Russia – history’s first example of total war – had turned into an epic military disaster. Over 400,000 French and Allied troops perished and Napoleon was forced to retreat. Adam Zamoyski’s masterful work draws on the harrowing first-hand accounts of soldiers and civilians on both sides of the conflict. The result takes the reader beyond the invasion of Russia to present both a poignant tale of the individual foot soldier and a sweeping history of a turbulent time.