Cover Reveal: The Drowning of Arthur Braxton by Caroline Smailes

For our first cover reveal of the year, we’re delighted to share a new look reissue of The Drowning of Arthur Braxton, Caroline Smailes’s novel about a teenage boy who discovers a naked girl in a swimming pool and is plunged into a tragic romance of mythological proportions. After a successful Kickstarter campaign by YouTube star Luke Cutforth to turn the book into a film , we’re hoping to introduce this dark and quirky cult hit to a whole new audience this July.

The Drowning of Arthur Braxton revolves around The Oracle, a mysterious bathhouse that bears more than a passing resemblance to Victoria Baths in Manchester. We wanted the new cover to capture some of The Oracle’s watery wonder, and we’re very pleased with how it came out. We hope you agree that the design perfectly complements the novel: playful and colourful, yet mysterious, with a subtle sense of danger. 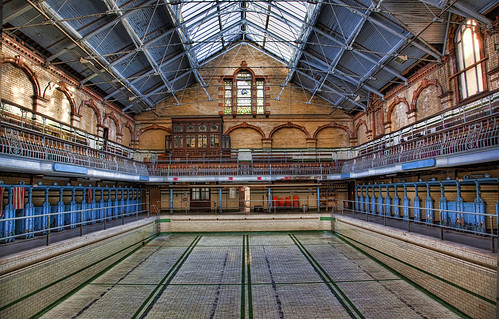 The Drowning of Arthur Braxton has already made a splash with famous fans such as Matt Haig, who called it ‘magical, weird, wonderful, dark unique Northern brilliance’ and Carys Bray, author of A Song for Issy Bradley, who said ‘there was so much about this book to love; the decrepit seaside setting, the terrible weather, the gritty realism, the magic, the freshness, the strangeness, and the way the story and the characters haunted me afterwards.’

Of all the novel’s famous fans, Luke Cutforth is perhaps the most passionate. Having bought the film rights, he encouraged his hundreds of thousands of YouTube subscribers to pledge to fund a film version. Funding was secured, casting has been completed, and shooting starts next month. The reissue of the novel will include an exclusive new introduction from Luke, along with acknowledgements to all the backers. For more information on the film, take a look at the video below:

We can’t wait to see the new cover on the shelves of bookshops in July – when you see it, you’d better buy it and read it fast, because the film will follow soon afterwards!

The Drowning of Arthur Braxton will be published by 4th Estate on 14th July 2015.

If you enjoyed this, try: