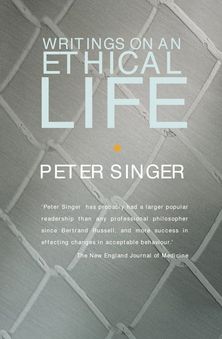 Writings on an Ethical Life

‘Peter Singer…has probably had a larger popular readership than any professional philosopher since Bertrand Russell, and more success in effecting changes in acceptable behaviour.’ The New England Journal of Medicine

Love him or hate him, you certainly can’t ignore him. For the past 20 years, Australian philosopher and professor of bioethics Peter Singer has pushed the buttons of our collective conscience. A passionate founder of the modern animal rights movement, Singer has challenged our most closely held beliefs on infanticide, euthanasia, the legal rights and moral obligations of all species, and much more, with arguments that intrigue as often and as powerfully as they incite.

Writings on an Ethical Life presents a comprehensive collection of Singer’s best and most provocative writing, as chosen by Singer himself. Among the controversial subjects addressed are animal rights, environmental accountability, abortion rights, euthanasia, and the ethics of public responsibility, providing an unsurpassed view of the underpinnings of Singer’s governing philosophy.

Reviews of Writings on an Ethical Life