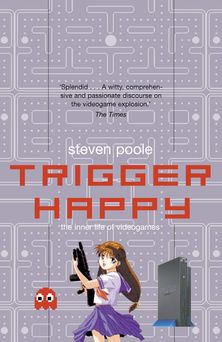 Ground-breaking account of the cultural history and impact of videogames, from Pong and Space Invaders to Tomb Raider and Tekken.

Videogames are here to stay. It is now more than a quarter of a century since the appearance of the first commercially available videogame, Pong. Now the profits on blockbuster games are measured in terms of the first weekend’s millions, like those of mass-market films. Sony estimates that nearly 1 in 5 UK households has a Playstation; worldwide sales of its console have topped 30 million. Videogame design is now the subject of accredited BSc degrees at universities. The market domination by British based videogame companies is one of the success stories of the decade.

Yet videogames are still seen as a compromised art-form, derivative at best, actively harmful at worst. In Trigger Happy, Steven Poole asks the question: If this is an artform, what kind of an artform is it? Where did it come from, and where is it going?

Reviews of Trigger Happy: The Inner Life of Videogames