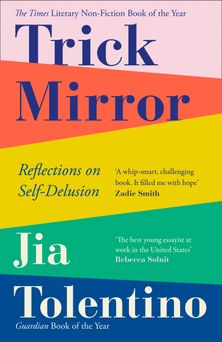 We are living in the era of the self, in an era of malleable truth and widespread personal and political delusion. In these nine interlinked essays, Jia Tolentino, the New Yorker’s brightest young talent, explores her own coming of age in this warped and confusing landscape.

From the rise of the internet to her own appearance on an early reality TV show; from her experiences of ecstasy – both religious and chemical – to her uneasy engagement with our culture’s endless drive towards ‘self-optimisation’; from the phenomenon of the successful American scammer to her generation’s obsession with extravagant weddings, Jia Tolentino writes with style, humour and a fierce clarity about these strangest of times.

Following in the footsteps of American luminaries such as Susan Sontag, Joan Didion and Rebecca Solnit, yet with a voice and vision all her own, Jia Tolentino writes with a rare gift for elucidating nuance and complexity, coupled with a disarming warmth. This debut collection of her essays announces her exactly the sort of voice we need to hear from right now – and for many years to come.