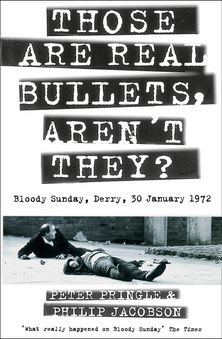 Those Are Real Bullets, Arenu2019t They?

Free Derry Corner, 30 January 1972, site of one of the pivotal events in modern British history. A civil rights march was led into an ambush. Thirteen civilians died, many killed by the British Army. It was the first instance of the British Army firing on its own citizens since the Peterloo Massacre in 1819[chk]. It ruined British authority in the province for a generation and was the single identifiable cause of the rejuvenated armed struggle that would last for the rest of the century. Yet it is shrouded in mystery and legend, in deliberate disinformation and deceit, in political interpretation from all sides involved. The events of Bloody Sunday, as it became known are told here as a vivdly dramatic narrative for the first time. Interspersed within the unfolding disaster is the story of the Troubles in Northern Ireland, a complex history revealed by two incisive and expertly informed writers who first researched events in Derry for the Sunday Times in 1972. Bloody Sunday is the most contested, mythologised and symbolic event in modern Irish history. Here, for the first time with the benefit of modern forensic science, new witnesses interviewed and against the background of the Savile report, is the truth of what happened.

Reviews of Those Are Real Bullets, Arenu2019t They?