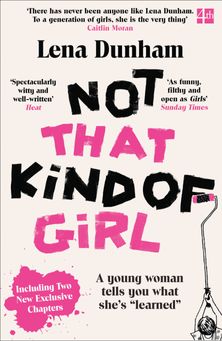 Not That Kind of Girl: A Young Woman Tells You What Sheu2019s u201cLearnedu201d

For readers of Nora Ephron, Tina Fey, and David Sedaris, this hilarious, poignant, and extremely frank collection of personal essays confirms Lena Dunham – the acclaimed creator, producer, and star of HBO’s ‘Girls’ – as one of the brightest and most original writers working today.

“If I can take what I’ve learned in this life and make one treacherous relationship or degrading job easier for you, perhaps even prevent you from becoming temporarily vegan, then every misstep of mine will have been worthwhile. This book contains stories about wonderful nights with terrible boys and terrible days with wonderful friends, about ambition and the two existential crises I had before the age of twenty. About fashion and its many discontents. About publicly sharing your body, having to prove yourself in a meeting full of fifty-year-old men, and the health fears (tinnitus, lamp dust, infertility) that keep me up at night. I’m already predicting my future shame at thinking I had anything to offer you with this book, but also my future glory in having stopped you from trying an expensive juice cleanse or having the kind of sexual encounter where you keep your sneakers on. No, I am not a sexpert, a psychologist, or a registered dietician. I am not a married mother of three or the owner of a successful hosiery franchise. But I am a girl with a keen interest in self-actualization, sending hopeful dispatches from the front lines of that struggle.”

Reviews of Not That Kind of Girl: A Young Woman Tells You What Sheu2019s u201cLearnedu201d