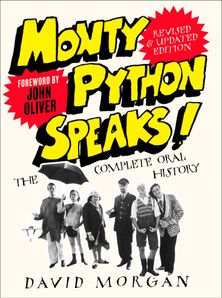 ‘Gilliam is one of the most manipulative bastards in that group of manipulative bastards. Michael is a selfish bastard, Cleese a control freak, Jonesy is shagged out and now forgets everything, and Graham as you know is still dead. I am the only real nice one!’ Eric Idle

With their dead parrots, holy grails and spam, Monty Python revolutionised comedy for the rest of the world. They paved the way for everything from Saturday Night Live to The Young Ones to The Simpsons. Its founding members, including the supremely talented writers/performers John Cleese, Terry Gilliam, Terry Jones and Michael Palin, ushered in a new brand of surrealist comedy: a stream-of-consciousness sketch show that pushed the boundaries of format, style and content. Its legacy is not only important; it’s monumental.

In Monty Python Speaks!, David Morgan has extensively interviewed the entire world of Python – from producers and collaborators like Douglas Adams, to the founding members themselves – to create the ultimate record of Britain’s most revolutionary and successful comedy act. Packed with rare and never-before-seen photographs, and told with all the group’s customary wit and irreverence (and spam), this is the inside story of a comedy phenomenon.