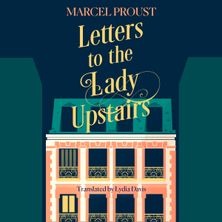 102 Boulevard Haussmann, an elegant address in Paris’s eighth arrondissement. Upstairs lives Madame Williams with her second husband, an American dentist, and her harp. Downstairs lives Marcel Proust, feverishly trying to write In Search of Lost Time, but all too often distracted by the incessant noise from the apartment above him – the footsteps and banging and unbearable moving of boxes and crates.

Written by Proust to Madame Williams between the years 1909 and 1919, this little cache of letters was discovered a few years ago in the archives of a Paris museum. In them we read of the comings and goings of a Paris building; of the effort required to live peacefully with annoying neighbours; of the sadness of losing friends in the war; of concerts and music and writing; of illness; and – above all – of a growing, touching friendship between two lonely souls.