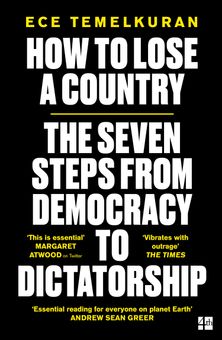 How to Lose a Country is an impassioned plea, a warning to the world that populism and nationalism don’t march fully-formed into government; they creep. Award winning author and journalist Ece Temelkuran, identifies the early-warning signs of this phenomenon, sprouting up across the world from Eastern Europe to South America, in order to define a global pattern, and arm the reader with the tools to root it out.

Proposing alternative, global answers to the pressing – and too often paralysing – poltical questions of our time, Temelkuran explores the insidious idea of ‘real people’, the infantilisation of language and debate, the way laughter can prove a false friend, and the dangers of underestimating one’s opponent. She weaves memoir, history and clear-sighted argument into an urgent and eloquent defence of democracy.