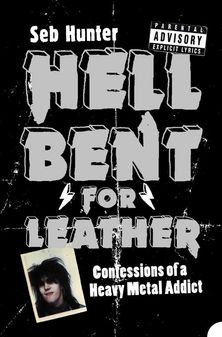 Seb Hunter was a Heavy Metal fan and he’s not proud. This is the story of his misguided 15-year Heavy Metal mission: from the first guitar (his dad’s), to the first gig (conquering Winchester with his riffs), on through groupies and girlfriends and too many drugs to a faltering career in London, where outrageous egos, artistic differences and the dreaded arrival of Grunge (and a much needed haircut) kill the Heavy Metal dream. Along the way Seb imparts the important distinctions between Thrash Metal and Glam and casts his connoisseur’s eye over the Metal guitar. You’ll learn when to play a drum solo, the correct way to wear Spandex and exactly what to do when you’re in the middle of a field at the Donington Festival and you desperately need a piss. Affectionate, irreverent, and very funny, Hell Bent For Leather is a moving story about growing up, of playing air guitar in your bedroom, of living with parental disapproval and of struggling with the laughter of your friends. It is a memoir about the glorious adolescent obsessions everybody has but no-one will admit to. Featuring music from: AC/DC, Iron Maiden, Led Zeppelin, Judas Priest, Black Sabbath, Slayer, Kiss, W.A.S.P., Aerosmith The Scorpians and Guns ‘n’ Roses.

Reviews of Hell Bent for Leather