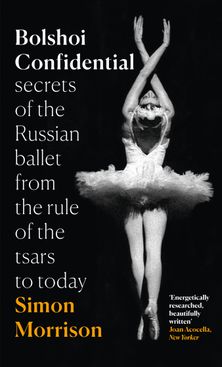 On the night of January 17, 2013, the artistic director of the Bolshoi Theater Ballet, Sergei Filin, was attacked with battery acid by a hooded assailant outside his house. News of the attack and Filin’s possible blinding circled the globe. He had known he was a target, he told reporters. High-profile positions at the Bolshoi came with such risks.

Everyone has a stake in the settling, if not the solving, of the crime: from the dancers who have been purged from the ranks under suspicion of being involved, to the opaque political and monied interests at war with each other with the Bolshoi caught in the crossfire. Truth being illusive in Russia, the country itself a kind of theatre, the tale is thickly layered. This book cuts through to the core of the crime and the foundations of the buildings—the Bolshoi and the Kremlin—where it all was scripted.

Those who survive the current time of troubles will have the power to chart the artistic and financial course of the Bolshoi moving forward, or perhaps back. Whatever happens will always reflect what is happening within politics. The story of the Bolshoi showcases the glamor, beauty, prestige, and cruelty of life in the spotlight—and of Russia itself.