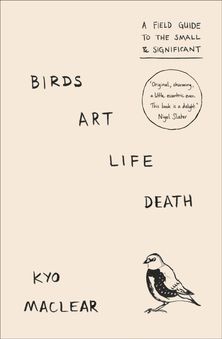 One winter, Kyo Maclear became unmoored. Her father had recently fallen ill and she suddenly found herself lost for words. As a writer, she could no longer bring herself to create; her work wasn’t providing the comfort and meaning that it had before.

But then Kyo met a musician who loved birds. The musician felt he could not always cope with the pressures and disappointments of being an artist in a big city. When he watched birds and began to photograph them, his worries dissipated. Intrigued, Kyo found herself following the musician for a year, accompanying him on his birdwatching expeditions; the sounds of birds in the city reminded them both to look outwards at the world.

Intricate and delicate as birdsong, Birds Art Life Death asks how our passions shape and nurture us, and how we might gain perspective, overcome our anxieties and begin to cherish the urban wild spaces where so many of us live.