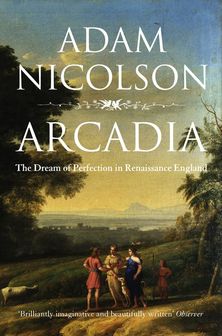 Was our country once a better place? Has modernisation destroyed as much as it has improved? And can we see in an earlier Britain a way of living, an Arcadia, which now seems both ideal and remote?

Through 16th- and 17th-century England, the changes of an approaching modernity accelerated. With the growing power of the state, the disruption of the traditional bonds of society, the breaking of communities and the marginalisation of the great families who had once balanced the power of the crown, the new mercantile, individualist world increasingly clashed with the communal and chivalric ideals of the old.

To tell this story from the 1520s to the 1640s, Adam Nicolson takes a single great family, the Earls of Pembroke, their wives, children, estates, tenants and allies, and follows their high and glamorous trajectory across three generations of change, nostalgia, ambition, resistance and war.

‘Arcadia’ is a rich and detailed evocation of England on the hinge of medieval and modern, and in this wide-ranging book Adam Nicolson explores a world in transition, moving from the intrigues, alliances and vendettas of the court to the intricate, everyday business of rural communities managing their affairs in times of stress. It was an England caught up in its first taste of modernity, yet divided over how to react to it, split between the old and the new, the moment at which the world we have lost turned into the world it has now become.